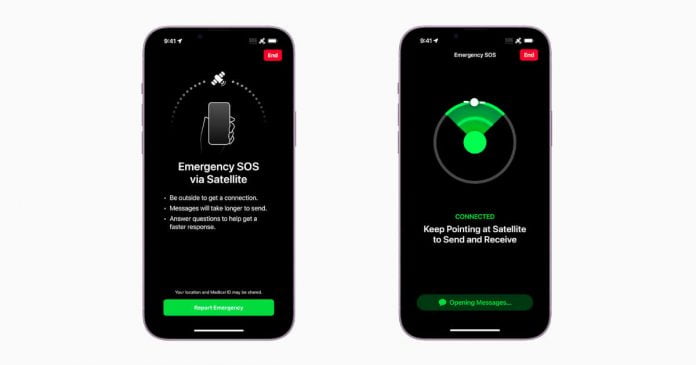 One of the most exclusive innovations of the iPhone 14 was the Emergency SOS service, which lets you send messages to emergency services via satellite if the user is in a dangerous situation outside of cellular coverage. It is now available in the United States and Canada.

After updating the iPhone 14 series to the latest version of iOS, the emergency SOS demo mode will be accessible. When in demo mode, the user connects to the server rather than the satellite and the actual operator of the emergency contact centre, which provides pre-programmed responses to the queries.

The user must follow several steps to establish the satellite connection on their iPhone 14 and contact emergency services. The feature is activated only when the iPhone has no Wi-Fi or network coverage. However, for it to work, it is first necessary to call the emergency number of the corresponding country (for example, 911 in the United States).

If the iPhone 14 does not have any network coverage, an option to use the Satellite SOS Emergency function will be offered on the screen. When making an emergency call, the content of the message is created in the form of a questionnaire so that the user can answer important questions with a simple operation. The user has to follow the steps indicated on the screen to establish a connection with the nearest satellite, and the message is sent to the emergency services.

iPhone battery level, medical ID, etc., are shared. After answering the questions, the message is sent, and an Apple-trained specialist will report the rescue request on your behalf. The message is sent and received with up to 300% compression. Satellite communications generally have low bandwidth, and due to the constant movement, it can take several minutes for a message to arrive.

Users can set up to 10 contacts to set as emergency contacts. If the contact uses an iPhone with iOS 16.1, iMessage will share the message. If the contact is on an older iOS version, the location information and emergency status will not be notified.

The emergency SOS functionality using satellite will be free for two years after activation of the new iPhone 14 series. This service will be available in December in France, Germany, Ireland and the United Kingdom.