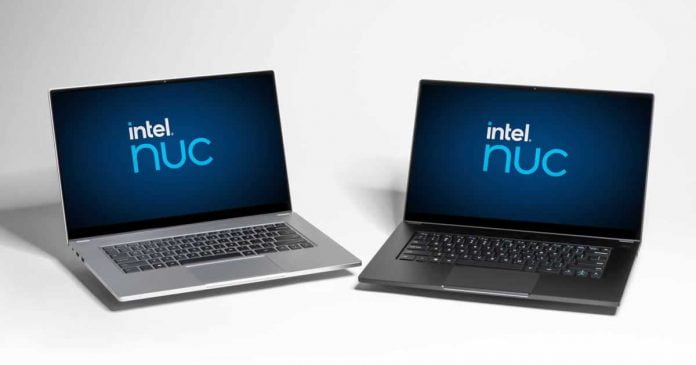 Intel has announced the new NUC M15, a laptop that won’t actually hit the market under the Intel brand name but under low-priced brands.

The laptop market is already dominated by brands like Dell, Asus, or HP, but the new NUC M15 serves a more important function than simply offering a new laptop. Intel has created its own laptop, but not to sell it directly, but other companies can sell it under their brand. The new Intel NUC M15 is a ‘white label’ laptop, designed to be more generic but also cheaper.

NUC M15 is based on 11th generation Intel Core processors, with a choice between the core i5-1135G7 or the quad-core i7-1165G7. It is also special that Intel’s Iris Xe Graphics G7 is included here, which is integrated into the SoC with a maximum of 96 activated compute units.

With an aluminum body, NUC M15 will weigh around 1.65 kg for its 15.6-inch screen size. The display has a resolution of 1920 x 1080 pixels and will be IPS, and you can choose touch as an option. However, the panel is not anti-reflective.

It will be possible to choose between 8 GB or 16 GB of RAM, although you have to choose well because it cannot be increased later.

The notebook has access to two Thunderbolt 4 ports that are compatible with USB-C. In addition, screens can be connected via DisplayPort Alt Mode, or devices can be charged via Power Delivery (20 V, 3.25 A). There are also two USB-A interfaces (3.2 Gen2) and HDMI 2.0b. The integrated Intel AX201 wireless module transmits via Wi-Fi 6 and Bluetooth 5.1.

Intel seems to have designed this laptop primarily for productivity, so it can be a good choice for telecommuting or studying. Intel has not talked about prices because it depends on each brand, but they will surely be much cheaper when they arrive in early 2021.