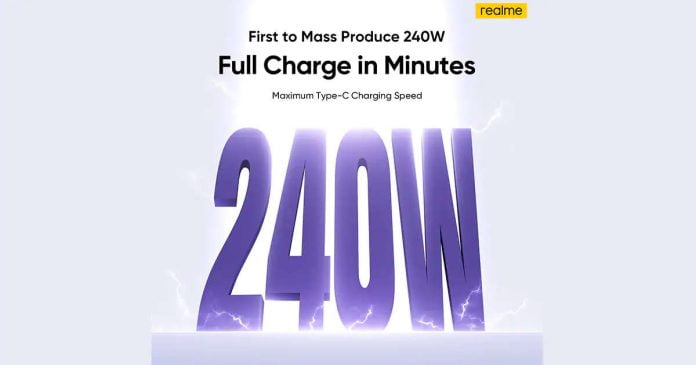 Realme has made a significant stride in the smartphone industry with the unveiling of its 240W charging system. The technology will be featured in the upcoming Realme GT Neo 5 smartphone, set to be released in February 2023.

The Snapdragon 8+ Gen 1 CPU will power the GT Neo 5, while there are rumours of a variant with a Dimensity 8200 processor and 150W charging capacity.

To ensure the safety of the charging process, the GT Neo 5 will have 13 temperature sensors to monitor the temperature and suspend charging if it exceeds the expected levels. Realme further says that after 1600 charge cycles, the battery would retain 80% of its original capacity.

The 240W charging block is only 5% larger than a 150W charger, and Realme has created a unique USB-C cable to support the high-power output. The power supply converts 20V 12A to 10V 24A with an efficiency of 98.5% and is compatible with 65W PD, QC, and VOOC protocols.

In addition to the temperature sensors, the GT Neo 5 will have the largest evaporation chamber on the market, with a total area of 6,580 sq. mm. These features will work together to ensure the safety and effectiveness of the 240W charging system.

Overall, the Realme GT Neo 5, with its 240W charging technology, is an exciting development in the smartphone industry. The company’s commitment to safety and efficiency makes it a promising choice for consumers.