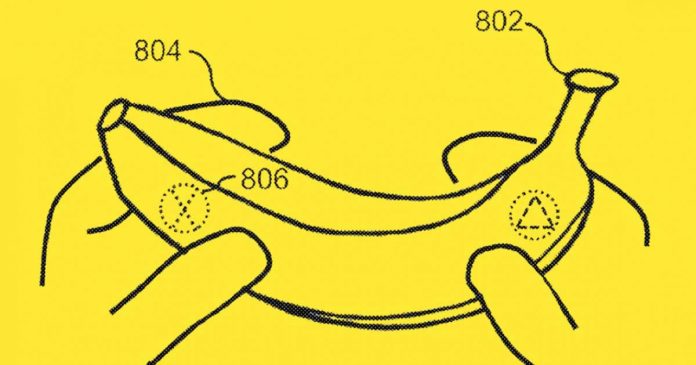 Sony is researching bananas, oranges, and other everyday objects used to control games on the Playstation.

It sounds like a joke, but it’s true — A new patent from Sony shows how any object could be a controller for its PlayStation platform.

While the PlayStation 5 was released in November 2020, Sony is continuing with its wave of patents that could help improve the future of the platform. Last time we saw a Sony patent that shows a new AI system capable of dynamically raising or lowering the difficulty of a video game.

Now with this new patent where we can “an inexpensive, simple and non-electronic device as a peripheral for video games” could stop depending on official controls like Dualsense gamepad.

So much so that a banana appears as an example in the patent. This method works with “any passive non-luminous object held by a user,” which describes a very wide spectrum of easily accessible everyday objects. For example pens, glasses and of course other peripherals would also work.

It would not be necessary to install additional components, as a system of virtual buttons would take care of “transforming” the object into a remote control.

The idea is that a camera obtains the images of the object in the hands of the users and tracks their main elements based on pixels, contours, and colors. By obtaining its shape, you could map the appropriate areas to “insert” the virtual buttons.

Now, the patent describes that, since there is a practically unlimited variety of shapes, the system could suggest objects to users. Another option would be to train the system on the most frequently used objects.

If motion control does not work, then we have the camera mapping the necessary buttons on the object in question and thus explain through images which parts of it must be “touched” to perform according to what actions.

Certainly, the idea posed by PlayStation is very interesting. Unfortunately, this is one of those patents that, more than likely, you will never see a real application.