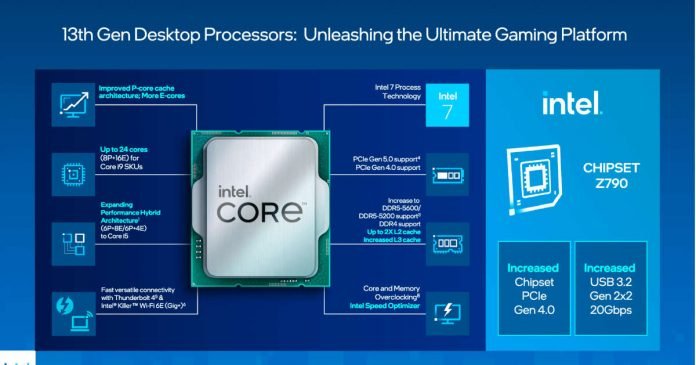 CEO Pat Gelsinger presented six new processors based on Core-i-13000 at Innovation 2022 — three ranges of processors are offered in options with and without integrated graphics — two Intel Core i5, two Core i7 and two Core i9. Spread over all areas, the Raptor Lake generation should contain over 50 processors.

Raptor Lake is the refresh from Alder Lake that was pushed in at fairly short notice for CPU conditions in order to bridge the time until Meteor Lake in the coming year. The basic architecture remains the same, but Intel has tightened a few adjustment screws, together with a further optimized 10 nm process, and also made more clock available. The result is the fastest Intel processors, which will face AMD’s Ryzen 7000 series.

Intel has improved its manufacturing process on the P cores, offering a higher frequency and up to 2MB of L2 cache per core, a significant jump from the previous generation’s 1.25MB. E-efficiency cores went from 2MB to 4MB per cluster of four.

Compared to the 12th generation, the Core i9-13900 K/F processors integrate two new E-core clusters (16 cores), while the Core i5 and Core i7 processors added one E-cluster each. In terms of speed, the P cores received a boost of up to 600 MHz on the Core i9s, while the E cores are 400 MHz faster than their predecessor.

The Intel Core i9 13900K advertises 15% more performance for a single thread and a 41% increase in multithreaded performance.

Intel made some comparisons with previous generation Ryzen models showing how the Core i9 13900K outperforms the Ryzen 9 5950X by more than 50% in games like Marvel’s Spider-Man or Arcadegeddon, as well as titles like Far Cry 6 by a lesser percentage, F1 22 and The Riftbreaker. The company said its new processor offers a gain of 24% in games and up to 34% in applications for content creators compared to the 12900K.

In addition to the support of DDR4-3200, the memory controller has been revised and now supports DDR5-5600 compared to DDR5-4800 on Alder Lake. A key difference from the Ryzen 7000 is that Intel offers DDR4 memory support in Raptor Lake. With DDR5 memory prices almost doubling right now, more people will think twice before migrating to an architecture that doesn’t support the cheaper RAM.

Raptor Lake processors use the LGA 1700 socket and are compatible with 600 series motherboards via a BIOS update. However, the 13th generation comes with the new Z790 chipset that offers support for a USB 3.2 connection, up to 20 PCIe 4.0 lanes and 16 PCIe 5.0 lanes.

Intel confirmed that its Raptor Lake processors will be available starting October 20.