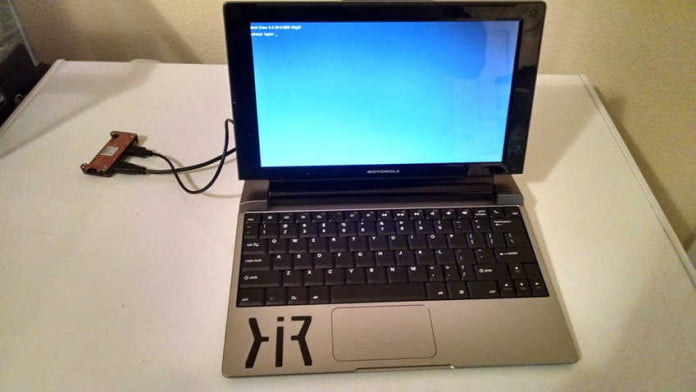 In recent years, we have seen many wonders done with Raspberry Pi and Arduino in different DIY computing projects. Because of their size and their price, these single-board computers have been used in the creation of everything from home media centers to a space-ready X-Wing. And now Now, one creative user has just turned Motorola Lapdock into an actual laptop with Raspberry Pi Zero.

One creative Raspberry Pi owner, just changed Motorola Lapdock 100 into a a fully fledged laptop with Raspberry Pi Zero and a couple of cables.

Motorola Lapdock 100 is a CPU-less laptop designed for plugging in your smartphone that enabled you to use your phone as a computer.

Motorola launched the product in 2011, but it wasn’t a big seller and the company discontinued its Lapdock products about a year later.

Now about the Raspberry Pi Zero, it is a surprisingly powerful machine, with 512MB of RAM and a CPU faster than the original Pi. Pi Zero is the heart of a Raspberry Pi on a tiny 65mm x 30mm board with mini-HDMI, micro-B OTG USB, and the same 40-pin GPIO it still has great connectivity and cost only $5.

Hence turning Lapdock to actual laptop won’t cost you much money if you follow the plans laid out by blogger Ax0n over at H-I-R.net.

All it takes is a Raspberry Pi Zero and a couple of cables. Heck, even if you have to go out and buy a Lapdock this still isn’t an expensive build.

Because the Raspberry Pi Zero sells for just $5. You can pick up the two cables you need — micro USB to USB OTG and female micro HDMI to HDMI — from Amazon for around $8. You should be able to find a working Lapdock on eBay for $60 or $70. That brings the total bill to roughly $80.

Previous iterations of the Raspberry Pi and similar computers from other manufacturers worked well with the Lapdock, but the wiring used to connect the two devices could make things messy.

But the Raspberry Pi Zero is so tiny that everything fits in the case with some minor modifications.

One of the  modifications made by Axon is drilling out two holes — one to allow easy access to the Pi’s micro SD card slot and another just over the Lapdock’s reset button. Check out the full guide here.

So Still, if you happen to have an old Lapdock gathering dust and $5 to spare, it might be worth trying out this build for yourself. It might not be a PC capable of running the latest video games, but it’s certainly an interesting project.